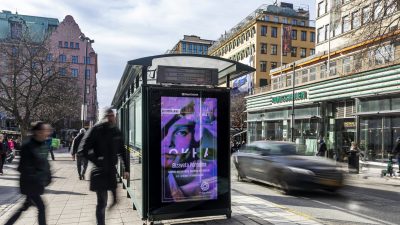 Locations
Click here to see a map with an overview of all our digital screens in Sweden.

Material sent in no later than 12.00 noon is handled the same day, no later than 5.00 p.m. (valid Mon-Fri with the exception of vacation periods and public holidays).

Material sent in after 12.00 is handled no later than 12.00 the next day (valid Mon-Fri with the exception of vacation periods and public holidays).

Handling of campaigns / creatives that may be controversial, and going to be played in the transit environment, can take up to 48 hours.

Delivery later than the specified date, wrongly delivered format or production, may result in an extra cost and a possible delay of the start of the campaign. In the event of deviations, a written agreement between the client and Clear Channel Sverige AB must be made.

Important information about advertising in public transport.
Due to safety regulations, it is prohibited to use the color orange as an all-over background in advertisements seen in a subway or commuter train environment. Please check against purchased screens.