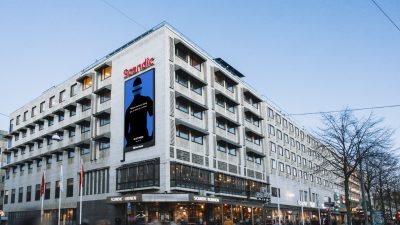 The focus for this year’s West Pride is the asylum process for LGBTQ people, and the agency AKQA has created a touching campaign, The Ambassadors of Pride, which portrays six individuals who all tell their background and experiences. To understand the work and history about this campaign we asked AKQA for a chat.

David Wedebrant, Managing Director at AKQA told us about the work behind the campaign and how the idea for the campaign Ambassadors of Pride came about.

– We have had the honor of collaborating and supporting West Pride previously, and together we share the belief that we have a duty to protect basic, inalienable human rights. This year, the plight of LGBTQ refugees was one of those wrongs we wanted to make right together. And if we cannot just bring attention to a broken asylum system, but have a tangible life-changing solution as part of the idea, we could create a meaningful spark of change.

The six individuals portraited in the campaign has incredibly strong stories. We ask if it was difficult, given the situations of the individuals, to get them to come forward to do the campaign?

– If not done in the right way with several layers of confidentiality and secrecy this might have been very difficult, but together with local NGOs and a law firm specialised on LGBTQ rights in asylum cases, the process has been kept very thorough and confidential as we came in contact with these six individuals, David Wedebrant explains.

– Each of their backgrounds and stories are unique, but relevant to many others, and urgent enough to demand quick and decisive help. The people portraited in the campaign all understand this, which is why they accepted the risks of speaking out in the campaign.

The Ambassadors of Pride campaign is a moving and strong campaign that is different from what Pride campaigns otherwise tend to be. We ask David Wedebrant why they chose to show the campaign in this way, and he eagerly answers.

– Keeping the individuals anonymous was key to making this happen, as they are risking everything to participate. The subject is dark and serious enough, so in order to still present them proudly; their identities are hidden with a design that takes inspiration from the equal sign in the West Pride logo. Paired with the colours of the rainbow, it also illustrates how all love is equal; but also, that not everyone is free to show it.

Clear Channel proudly supports Pride in several cities all over Scandinavia. Read more about this here.

See the messages of West Pride at their web pages:

The campaign has received a lot of media attention. See examples at: